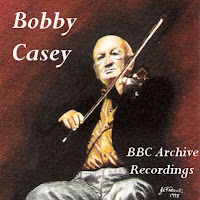 These are a number of tracks recorded by Reg Hall and Bill Leader between 1966 and 1971 as part of an album project that sadly never came to fruition. Of the 137 tracks in the archive, 18 have been released on the Bow Hand label on an album entitled 'The Spirit of West Clare', a recording that is becoming increasingly difficult to locate. Veteran seem to be one of the few companies in England with copies in stock, and in the USA it can be purchased here, from Ossian USA and Celtic Grooves Imports. The remaining tracks include duets with Andy O'Boyle, Tommy McCarthy, an unidentified accordion player, and an unidentified flute player. The tracks I have included here feature Bobby Casey playing solo fiddle, and singing a fine old ballad 'Sweet Inniscarra', and the duet material will follow. I have avoided repeating any of the tracks that found their way onto the Bow Hand release, which is, of course, the pick of the bunch, and I would absolutely urge anyone with an interest in this music to buy the album without delay. Particularly interesting tune selections here include the set dances 'Jockey to the Fair', and 'The Three Sea Captains', two Connaught polkas, the 'Dublin Reel' played in G, and the well-known Clare tune 'The Cliffs of Moher', also played in the unusual key of G major.

The image of Bobby Casey I have used is taken from a lovely painting by the artist Jane Ridout, whose work can be viewed here.

Once again, thanks to KR for this material. It's very much appreciated...