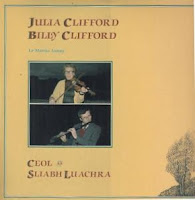 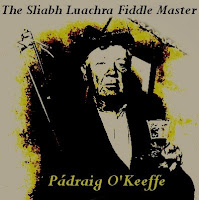 A deleted recording of the Sliabh Luachra fiddle player and teacher taken from RTÉ archive recordings made by Séamus Ennis between 1947 and 1949. This is absolutely brilliant Sliabh Luachra music, and the final set of tunes - a duet with Denis Murphy - is a classic.

1. Quinn's/Callaghan's [Reels]
2. Gallagher's [Jigs]
3. The Banks of the Danube [Air]
4. O'Sullivan's/O'Callaghan's [Polkas]
5. Johnny Cope [Hornpipe]
6. I'd Rather be Married than Left/Chase me Charlie/The Kilcummin [Slides]
7. The Old Man Rocking the Cradle [Air]
8. George White's Favourite/Kennedy's/The Road the Newbridge [Reels]
9. Gleanntán Frolics/The Hare in the Corn [Slides]
10. The O'Rahilly's Grave [Air]
11. The Humours of Ennistymon/I Will if I Can [Jigs]
12. John Quinn's [Hornpipe]
13. The Donaghmore [Reel]
14. Caoineadh Uí Dhomhnaill (Lament for O'Donnell) [Air]
15. The Kilcummin/If I Had a Wife [Slides]
16. As I Went Out Upon the Ice/Campdown Races/Tom Billy's/Jimmy Doyle's [Polkas]
Posted by Dragut Reis at 15:53 5 comments: