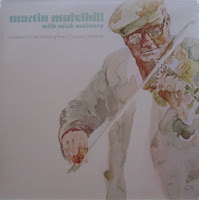 An absolute gem of an album, and a real testament to the magic and beauty of the old West Limerick fiddle style. I first got to know of Martin Mulvihill's playing through the music of another absolutely fantastic West Limerick fiddler, Diarmuid O'Brien, whose album 'Cairde Cairdín' is in my opinion one of the best fiddle albums of the last ten years, and another reminder of the wonderful musical heritage of the region. He acknowledges Martin Mulvihill as probably the greatest single influence on his music. The sweet tone and fluidity of the West Limerick fiddle style, as well as its absolute rhythmic solidity, seems distinct from the more heavily accented sound of the wider Sliabh Luachra region, with which the music of West Limerick shares a number of stylistic features, as well as a great deal of the repertoire. Although Martin Mulvihill spent most of his life abroad in England and the USA, he retained the regional style in which he was immersed as a young player for the rest of his life. There are a few releases featuring Mulvihill tracks, including the Rounder Records compilation 'Celtic Winds', which you can listen to here. Mulvihill released two teaching tapes, and another lovely album entitled 'The Humours of Glin', also on cassette. These can be purchased from Global Village Music via iTunes, but be warned, the recording quality is very poor, and whoever made the transfer made an absolute balls of the levels, resulting in considerable distortion. This, it would, seem, is characteristic of Michael Schlesinger's cavalier attitude towards the rights of both his consumers and the artists he is contracted to represent.