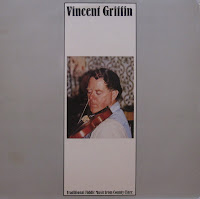 The first of two albums recorded by East Clare fiddler and teacher Vincent Griffin. The second album, recorded in 2000, was not made available on general release, but can be purchased directly from Vincent himself. Contact details are available here. Griffin's playing on this recording is a blend of the traditional East Clare style with the Sligo playing of the 78-era, with a heavy emphasis on Michael Coleman's style in particular. The characteristic East Clare intonation and exchange of Fs and F#s comes through nonetheless, and Griffin certainly has his own unique manner of expression. He is accompanied on a number of tracks by harp and piano, played by Geraldine Carrig. The Mayo air Se Bhfath Mo Bhfuartha (The Cause of my Sorrow) is particularly beautiful, and Carrig's harp accompaniment is very sweet indeed.