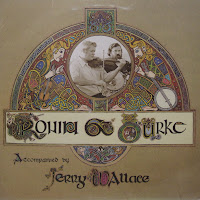 Johnny Cronin, brother of Paddy, a native of Gneevegullia, Co. Kerry, was well-known as a fiddle player in New York throughout the 1960s, 1970s and 1980s. His bowing technique, once typical of the Kerry style, underwent significant change after his emigration to the USA in 1956, particularly under the influence of Andy McGann, with whom he played a great deal. Joe 'Banjo' Burke, originally from Johnstown, Kilkenny, emigrated to New York in 1972, having spent much time in England. He was well-known as a singer among the Irish musical community in New York, as well as playing banjo regularly with the likes of James Keane, Jesse Owens, Paddy Reynolds and Andy McGann. Piano accompaniment is provided by Belfast-born Jerry Wallace, originally a piccolo player, the knowledge of which gave him the intimate awareness of tunes he felt necessary to provide convincing accompaniment.