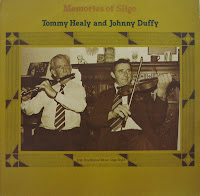 Tommy Healy and Johnny Duffy are musicians of the old South Sligo style, heavily influenced by both the recordings of famous émigrés Paddy Killoran and Michael Coleman, and the music of the dance halls and kitchen dances for which they played in their youth. The tune selection here is very much representative of the Sligo repertoire, with several notable exceptions, in particular 'The Lancers', derived from Spagnoletti's La Dorset, an early 19th Century piece originally published as Figure 1 of 'The Original Lancers' Quadrille', and 'Mrs Kenney', a lovely mazurka named after a 19th Century fiddle player from Dublin. They are accompanied on piano by Reg Hall.

3. The Rights of Man/The Honeysuckle [Hornpipes]

4. The Boys of the Lough/The Devils of Dublin [Reels]

5. The Scotsman over the border/Tell her I am [Jigs]

12. The Humours of Lissadell/Sweeney's Dream [Reels]

13. The Cavan Lasses (Coppers and Brass)/The Rose in the Heather [Jigs]