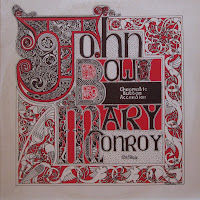 
Recorded in 1977 on Brendan Mulkere's Inchecronin label, Bowe's vigorous and inventive button accordion playing is pleasantly accompanied by Conroy's muted, almost piano-like, chord progressions on the guitar. It's a lovely accordion album altogether, and Mulkere was obviously on form when he wrote the sleeve notes: 'This record is especially for those who want to listen for construction, continuity and balance in the music.

If you are tone deaf this sleeve will make a nice poster'...