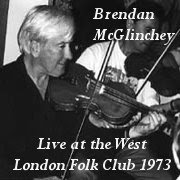 Recorded in November 1973 by Terry Yarnell, it features Brendan McGlinchey playing unaccompanied to the West London Folk Club. The sound quality is reasonable, and despite the considerable traffic noise in the background, McGlinchey's characteristically crisp and precise playing shines through. Unaccompanied here, McGlinchey's playing is less exact and more free than it is on his only studio-recorded album Music of a Champion, on which his playing is perhaps closer to its south east Ulster origins. Despite being involved in long tours with two ceili bands, McGlinchey stated that he always found it difficult to play in groups because his natural instinct to improvise was something he had to keep in check, while when playing alone he was free to follow his imagination. These two distinct elements in his playing can be compared by listening to both these recordings.

Track 19 seems to be corrupted. I included it simply as a point of social interest, not because it possesses any particular musical merit. Members of the Irish commmunity living in Britain during the Troubles will recall the significance of the Irish national anthem, played at the conclusion of social events (something that is far less contentious in these days of cute and fashionable Celticism). Those who are unable to download it, and wish to do so, can contact me on pashadragutreis@yahoo.co.uk