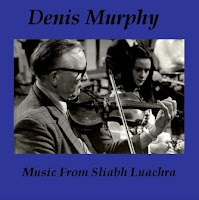 Compiled from recordings made by RTÉ between 1948 and 1969, and unfortunately out of print, it features a number of famous Sliabh Luachra musicians, as well as the Irish-American fiddler Andy McGann, and piper and collector Séamus Ennis. Sound quality is variable, as is to be expected, but the playing is, of course, nothing less than brilliant. Of particular interest is the Sliabh Luachra style rendition of 'The Turkey in the Straw', and the fluent sligo style duet between Murphy and McGann, as well as the array of beautifully played slides and polkas.