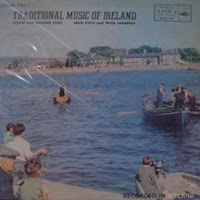 The second album in the Avoca series featuring Tipperary legend Seán Ryan, on which he is joined by Longford piper Peter Carberry. There is a rhythmic and tonal exactitude heard in these duet recordings which renders the individual sounds of the instruments indistinguishable in places, creating a hypnotic drive to the music which is quite unique and somewhat enchanting. I'm uncertain as to the exact date this recording was made, but it is likely to be some time around 1960.