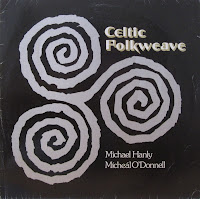 An excellent album (despite the appalling title) and a precursor to Ó Dhomhnaill's work with the Bothy Band and Nightnoise. A number of the tracks will be familiar to fans of the Bothy Band, including 'The Hag at the Churn', 'An Bothán A Bhaigh Fionnghuala', 'The Banks of Claudy', and 'The Heathery Hills of Yarrow'. The album was produced by Dónal Lunny, and it would seem that he learned from some of the mistakes he made in the studio this time round. Track 10 in particular is a terribly bad mix, but on the whole the production is adequate, though it's certainly not up to the standard of the material he was producing just a year later. It would seem that the master tapes of this recording were destroyed in a fire at the headquarters of Polydor Ireland some time in the 1970s, and subsequently this album has never been re-released. It features a number of big guns from the 1970s scene, including several members of Planxty, and future members of the Bothy Band:

There are two pieces of mouth music in both Irish and Gàidhlig, songs in Irish and English, two Breton tunes, and only one Irish dance tune. 'No Love is Sorrow' was composed by the original members of Pentangle, and appears on their album 'Solomon's Seal'.